Santo Domingo, R.D. June 4, 2018.– The Dominican airline Air Century opened its operations to the new destinations in the Caribbean: Aruba, Curacao and St. Maarten, with the flight Y2-161, which departed from Santo Domingo to Princess Juliana Airport in St. Maarten

With these new routes, the airline, which operates from La Isabela International Airport, Dr. Joaquín Balaguer, offers more options to its customers, in addition to its current destinations in San Juan, Puerto Rico and Port-au-Prince, Haiti.

“By opening these new routes, we extend a bridge of affection for all the Dominican brothers who reside in those islands full of history, music, culture, rich gastronomy and dreamy landscapes. They already have their airline. Real Dominican! “Said Omar Chahin, president and founder of Air Century.

He added that “The stellar moment we experienced today would not have been possible without the necessary and decisive support of the country’s aeronautical authorities, to whom I express my deep gratitude, to the executives of the Aerodom / Vinci airports consortium, represented here by its General Director , Mrs. Mónika Infante, who have offered their full support and commercial advice, but mostly because of the continued preference of our valued travelers who trust in the punctuality, comfort and warmth of our service. “

For his part, Mónika Infante, general director of Aerodom / Vinci Airports said: “We are pleased with the opening of these new Air Century routes from their HUB at La Isabela International Airport. With this we respond to the growing demand for seats to the Caribbean islands with which the country maintains a promising commercial and tourism relationship. ”

Flights to Curaçao will depart every Monday, Wednesday and Friday at 8:00 A.M .; to St. Maarten on Mondays, Wednesdays and Fridays at 2:15 P.M. and Aruba: Tuesdays and Sundays at 2:15 in the afternoon, with the punctuality that characterizes the airline.

During the event, held at the airport terminal, the fire department dismissed the flight to St. Maarten with the traditional water greeting.

About Aerodom / Vinci Airports
VINCI Airports, one of the 5 leading global players in the international airport sector, manages the development and operations of 36 airports located in France, Portugal (including the center of Lisbon), Cambodia, Japan, Chile, Brazil and the Dominican Republic. Served by more than 250 airlines, the VINCI Airports network handled 156.6 million passengers in 2017. Through its experience as an integral operator and the professionalism of its 12,000 employees, VINCI Airports develops, finances, builds and manages airports, taking advantage of its investment capacity, its international network and its knowledge, to optimize the management and performance of existing airport infrastructure, extensions of facilities and new constructions. In 2017, its annual income from its management amounted to 3,200 million euros, with a consolidated income of 1,400 million euros. 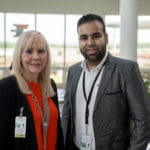 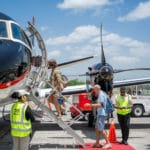 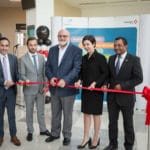