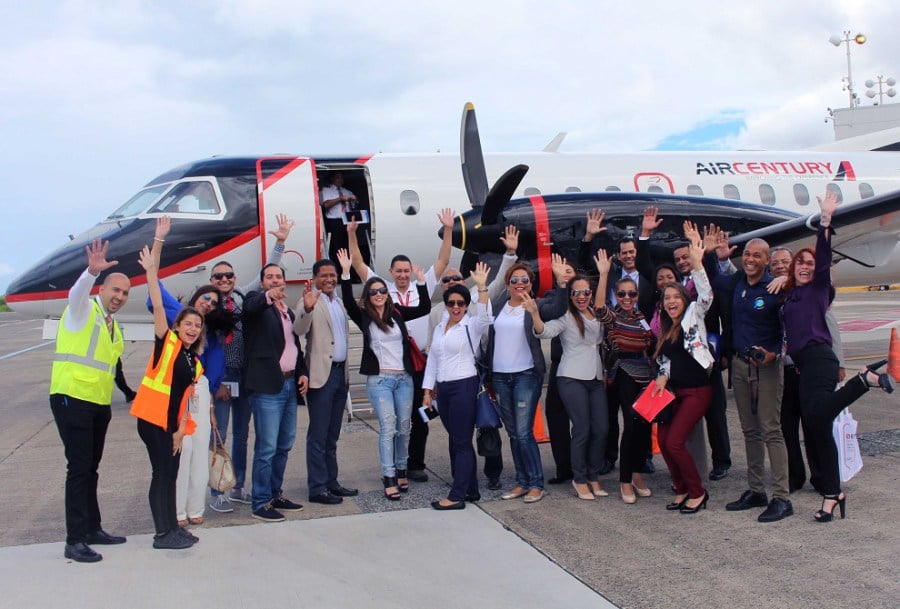 First and only flight to that destination operated from the President Dr. Joaquín Balaguer International Airport (AILI-JBQ) Dominican Republic – Puerto Rico.– The Dominican airline Siglo Aire inaugurated its regular route Santo Domingo – San Juan, Puerto Rico, with the objective of continuing to diversify the offer to reach commercial destinations within the region and boost its growth in the market. “A rung on the ladder that aims to place the airline in the preferred place in the air transport that connects our country with other important destinations in the continent,” welcoming words at the opening ceremony of the airline’s CEO, Omar Chahin.

With this new destination, the company’s offer of services in the Dominican aeronautical sector is extended, with executive flights and regular flights, taking into account its catalog of regular operations in Port-au-Prince, Haiti. With these routes and with the next regular destination on the agenda, Santiago de Cuba, the airline of the national capital seeks cooperation to achieve the applauded goal of His Excellency the President of the Republic, Lic. Danilo Medina Sánchez, to bring to 10 million the number of tourists visiting our beautiful country.

In that sense, Air Century offers the competitive advantage of operating from Presidente Dr. Joaquín Balaguer International Airport; only 20 minutes from the Dominican capital and with a lower flow of operations, which allows the processes to be carried out in less time, creating an environment of zero stress in the users. Carlos Rodolí, director of operations at AILI said that “we are very excited to be able to offer, together with Air Century, the option of a direct flight to Puerto Rico, a destination where a group of Dominicans reside a little below. to arrive for work or vacations directly to the Dominican capital. “” We congratulate Don Omar Chahin, President of Air Century and all his team, for their permanent display of commitment to this project, their efforts and work hours in coordination with the entire community. airport and for its support as a new achievement the start of this important operation “, added Rodolí.

Also, the Civil Aviation Association (JAC), the Dominican Institute of Civil Aviation (CESAC) and the Civil Aviation Association (CESAC) also the United States Department of Transportation (DOT), Federal Aviation Administration (FAA), Security Administration (TSA) and the Customs and Border Protection (CBP) of the United States, “entities that made their project giving us all the necessary support to make this challenge a reality”. In the event of the inaugural flight, the airline invited the press and travel agencies to live the experience of flying with Air Century towards the island of charm, boarding one of the new aircraft acquired SAAB 340B, of 34 passengers.

In San Juan, Puerto Rico, they shared special invitations at a luncheon where the company’s news was presented in this new market. The frequency of flight of the airline in San Juan, Puerto Rico, Monday, Friday and Sunday, reserve in www.aircentury.com and the telephones: (809) 826 4333 in Rep. Dom., Without charges the 1 (844 ) 317 3891 in Puerto Rico and 1 (844) 814 1989 in the rest of the United States. About Air Century Air Century is a local and international air transport company in Santo Domingo, Dominican Republic, in March of 1992 by Pilot Captain Omar Chahin, current president. Initially it only offered to the market local services of charter flights, transfers, helicopters, aerial advertising, overflights, among others. But then due to the growing demand of the market, it began to operate in the Caribbean, Central, South and North American islands and since mid of 2008 in Europe. Currently, executive charter flights, transfer of crews and regular flights to Port-au-Prince, Haiti and San Juan, Puerto Rico, with the participation of the Dr. Joaquín Balaguer International Airport in the Dominican Republic. It has highly qualified flight technical staff,